Who Is Your Cheerleader?

Who Is Your Cheerleader?

I completed my first 10K race about one month ago. As I was training by running around the track, I noticed that there was a guy who would always walk in the opposite direction of the track. At first it bugged and irritated me. Then he started cheering and applauding me every time I would pass him. I continued to focus on my thoughts and didn’t pay him any attention. I even started running in the evening, thinking that he wouldn’t be there! But he showed up in the evening as well.

On the day of the race, this man was far from my thoughts, until I hit my threshold with my knee hurting and the road being too hilly. After all, we are only 15 minutes from San Francisco:) Hills are expected!

Then I started to think of him. I really needed someone to cheer me up! In a race, no one is paying attention to you. It’s every man/woman for themselves! At that moment I realized the value he provided by walking in the opposite direction on the track. What’s strange is that I didn’t even know his name!

In my practice of giving financial advice, I often realize that some of our clients really just need someone to hold their hand and be a “Cheerleader.” The reality is that we are all capable human beings, with lots of potential. What happens is that we go adrift in the sea of life. We get derailed and sidetracked. We start blaming everything and everyone. We don’t have enough time or enough financial literacy. We can’t afford to pay a financial advisor.

I am in the same boat with you. My excuse is not enough time:( As Tony Robbins says, “This is lack of resources, not lack of willingness!”

My goal in life is to make a difference! In taking over MainStreet Financial Planning at the beginning of this year, I made myself a promise; that the company I want to grow will hold at its core, the “Cheerleader” offering!

Finances can be ugly, but only if you let them!

By the way, on the second day after the race, I went back to the track to just walk around, as my knee was still hurting. My nameless cheerleader was there, still walking in the opposite direction on the track. We started a conversation. His name is Peter and he is a former marathon runner! Who knew?!

Think about people in your life who are there for you no matter what. You didn’t even ask them. If you can’t come up with anyone, give me a call, I would love to be your “Cheerleader!“ 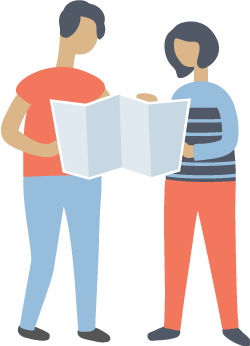